How To: Fix the Springs on the Saggy Sofa 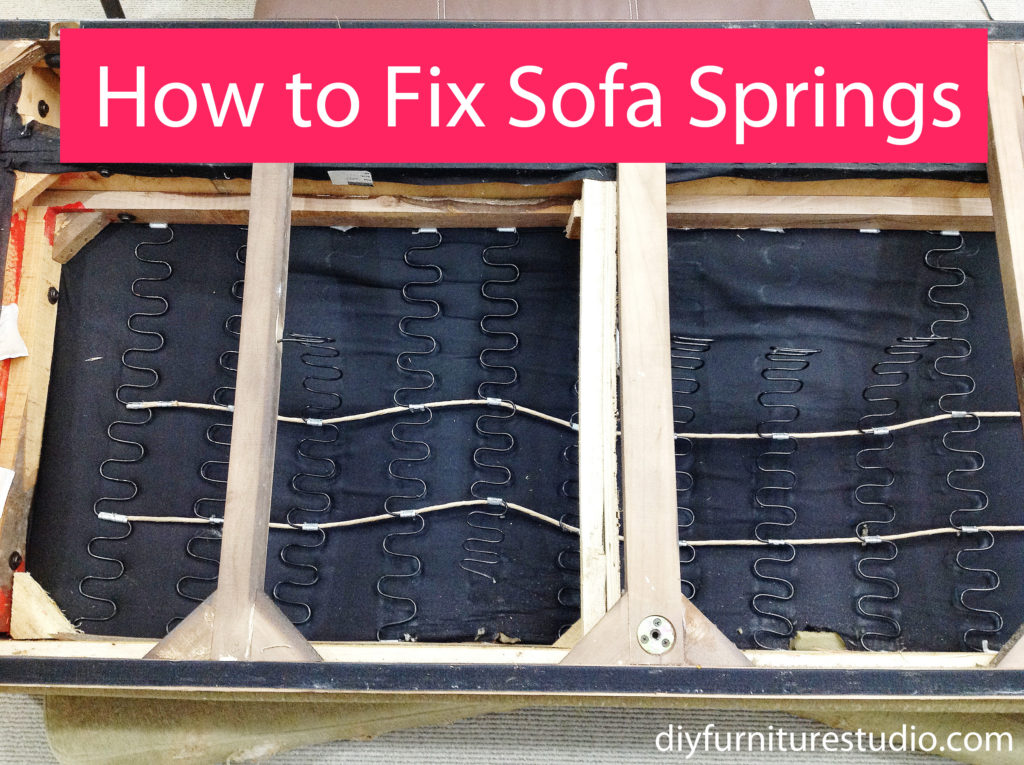 I’m starting another category, this one called “How To.” If you missed it, I also have an “Easy” category which includes projects that are exceedingly easy.  The “How To” category will include stand-alone skills and tasks that are useful in furniture-making, repair, makeover, upcycle, redo, decor-making, and the like.  In this post, I show how I fixed our very saggy sofa by rehabilitating the springs. 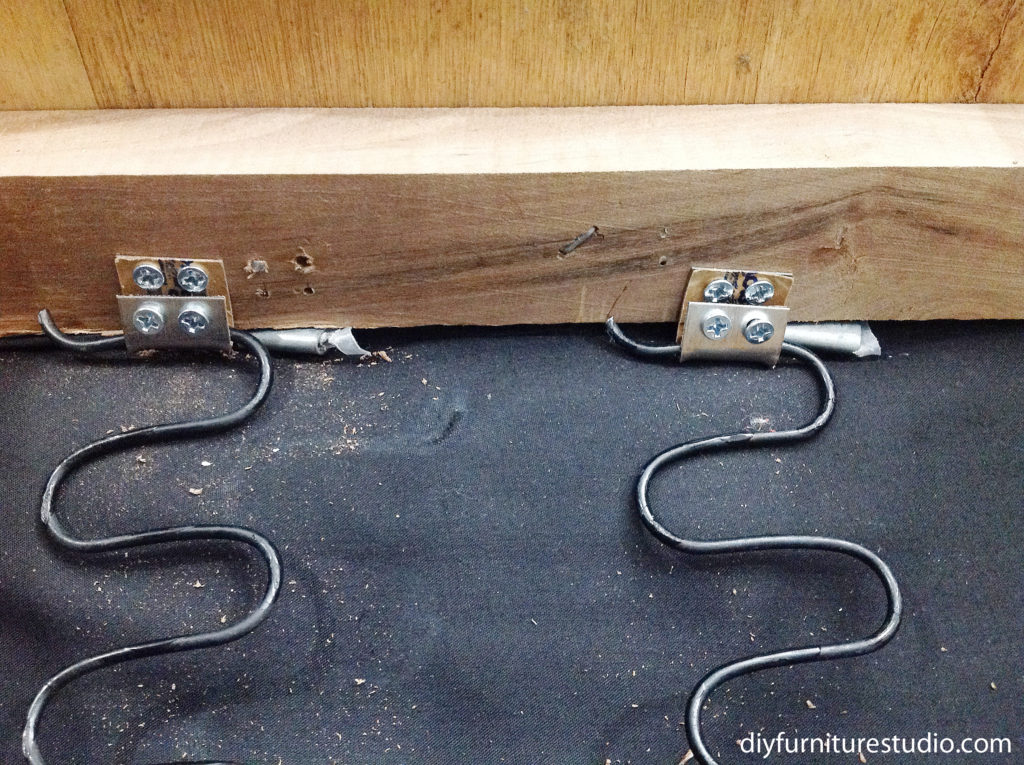 When I was contemplating starting this blog, I knew I would be making some furniture.  I also had another theme in mind, which is–Learn to love what you have.  Or maybe better stated–Make what you have something you love.  So what about this sofa?  I liked it well enough, but it was in rough shape.  We had this sofa for several years, and over time I noticed it was getting “soft.”  Finally it got so soft, I had to do something about it because it was starting to feel like I was sitting on the floor while sitting on the sofa.  Being not one iota curious about why the sofa was sagging, my solution was to cut a piece of pegboard and put it under the seat cushions.  This was good enough for a few years.

Then it happened.  I got curious about the sag.  I began with some research on the internet.  Then, I started work on the sofa.  To get to the springs, I turned the sofa over and removed the dust cover on the bottom.  On my sofa, the dust cover is attached with velcro and is easy to remove and put back when done.  You might need to remove the dust cover on your sofa by removing staples or even cutting it off and stapling on a new one after the spring repair.

I looked over the spring situation and saw that none of the springs were broken, but many of the zig-zag style springs had popped out of the spring clips.  Okay, I could just pop them back in, right?  No, they were more stubborn than me.  I had my husband help, but we couldn’t get it done.  The springs were too stiff and were angled so that to get them back in the clips, they would need to be stretched more than what appeared on the face of it.  On top of the springs not stretching enough, there seemed to be a plastic sleeve inside the clip which made it even more difficult to move a spring into place. 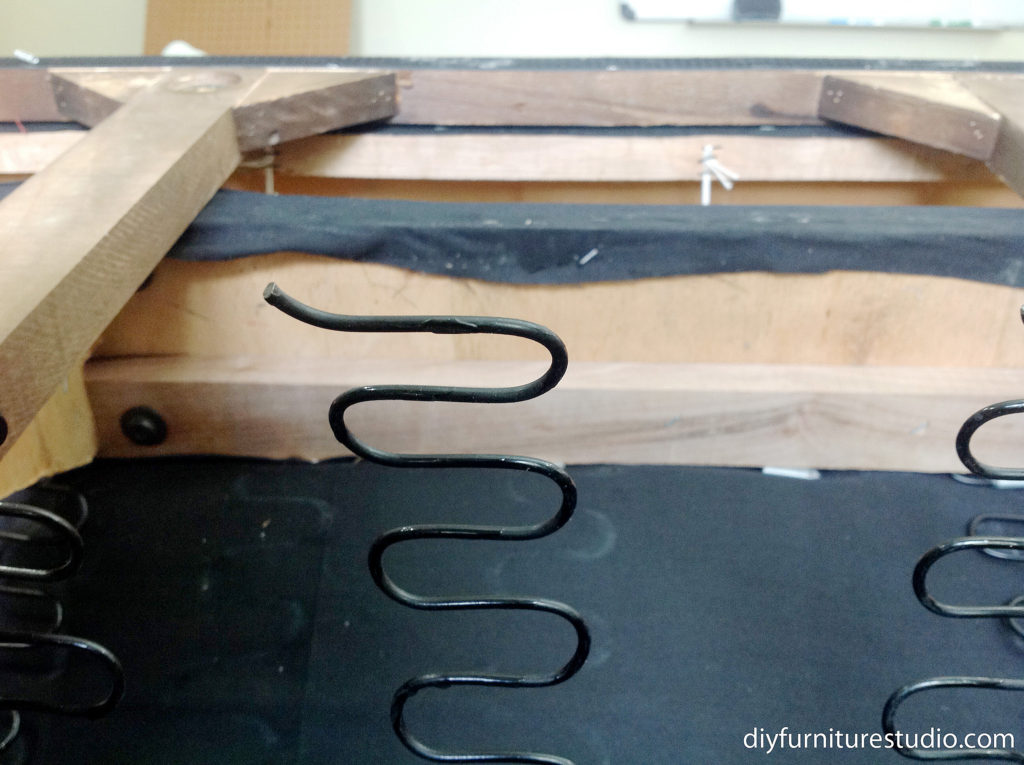 So I did more research and decided to put in new clips. The clips I bought are designed in such a way to make it easier to get the spring in.  I ordered these Upholstery EK Spring Clips (pack of 100) from Amazon, and they worked fine.  I bought a pack of 100, but they also come in packages of smaller quantities.  I got the larger package so that I could help friends and family fix their sags.  (It is a fairly common issue, apparently.) 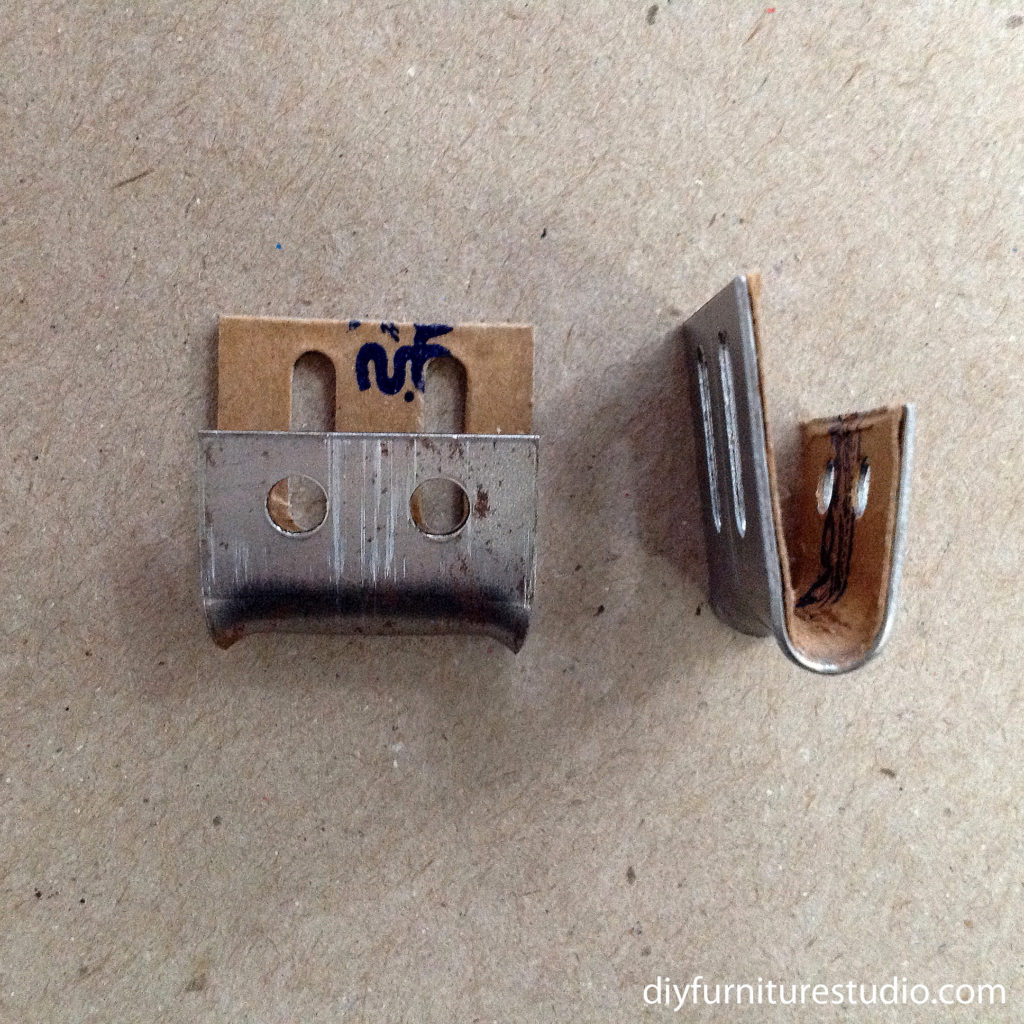 You can install the clips with nails or screws, and I decided to use screws because they generally hold better than nails.  I marked the location for the screw pilot holes.  Because there were staples in the way right above the original clips, I put mine just off to the side. 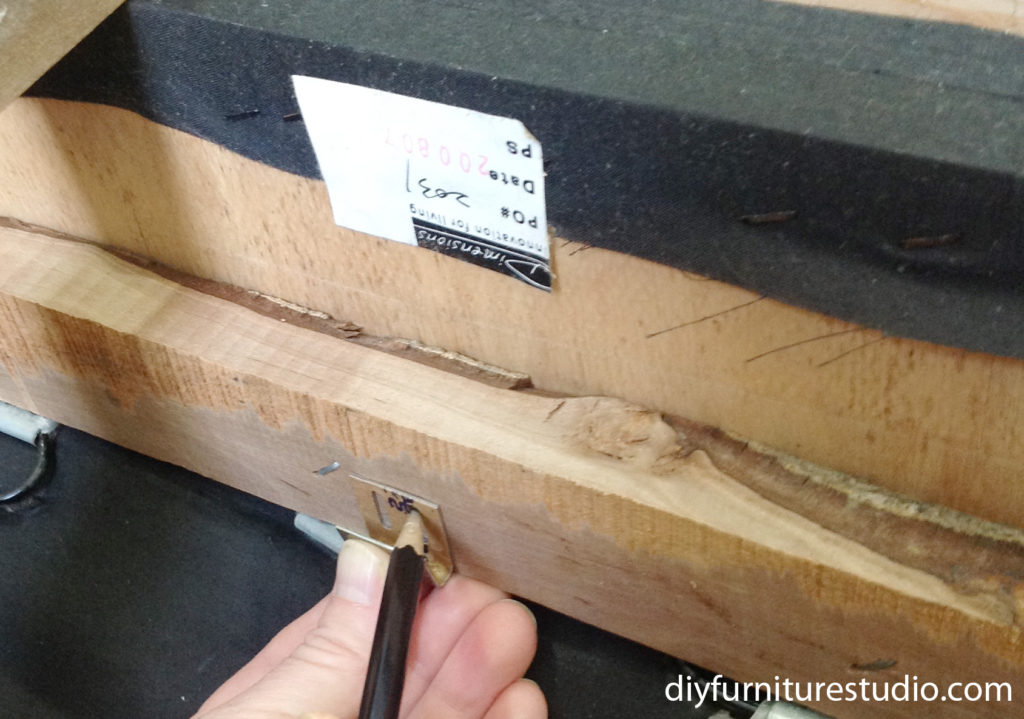 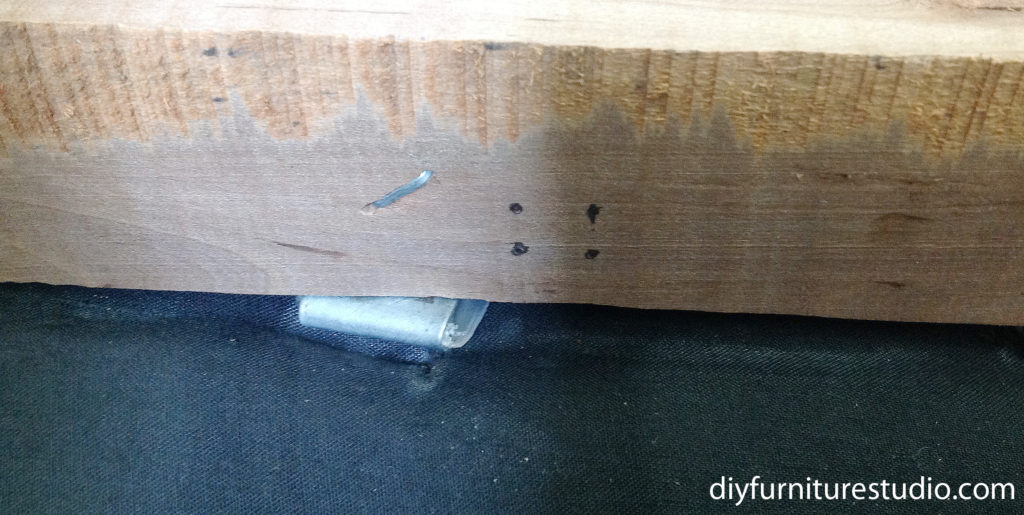 For each clip, I drilled the four pilot holes. 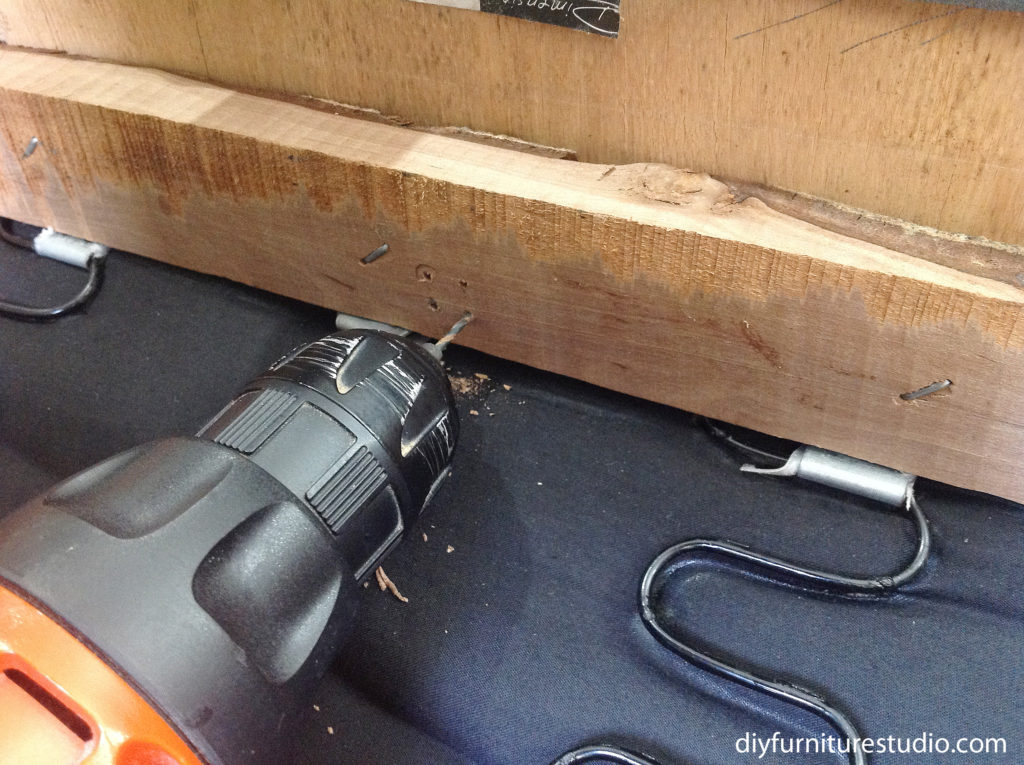 Then I put in the top two screws. 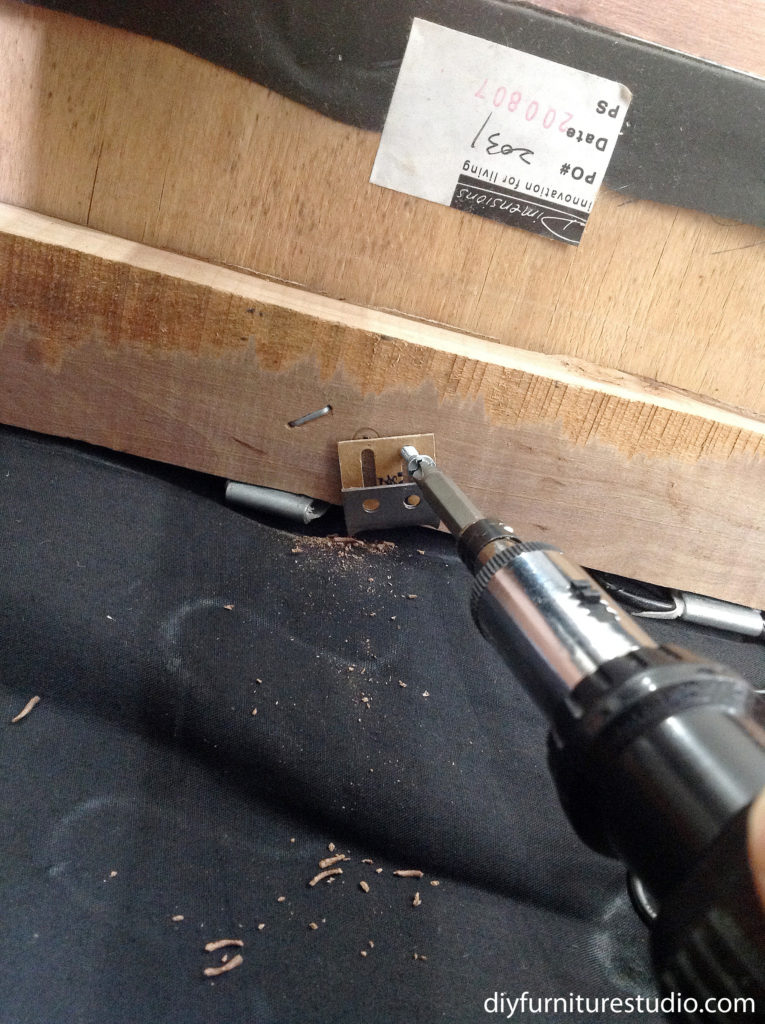 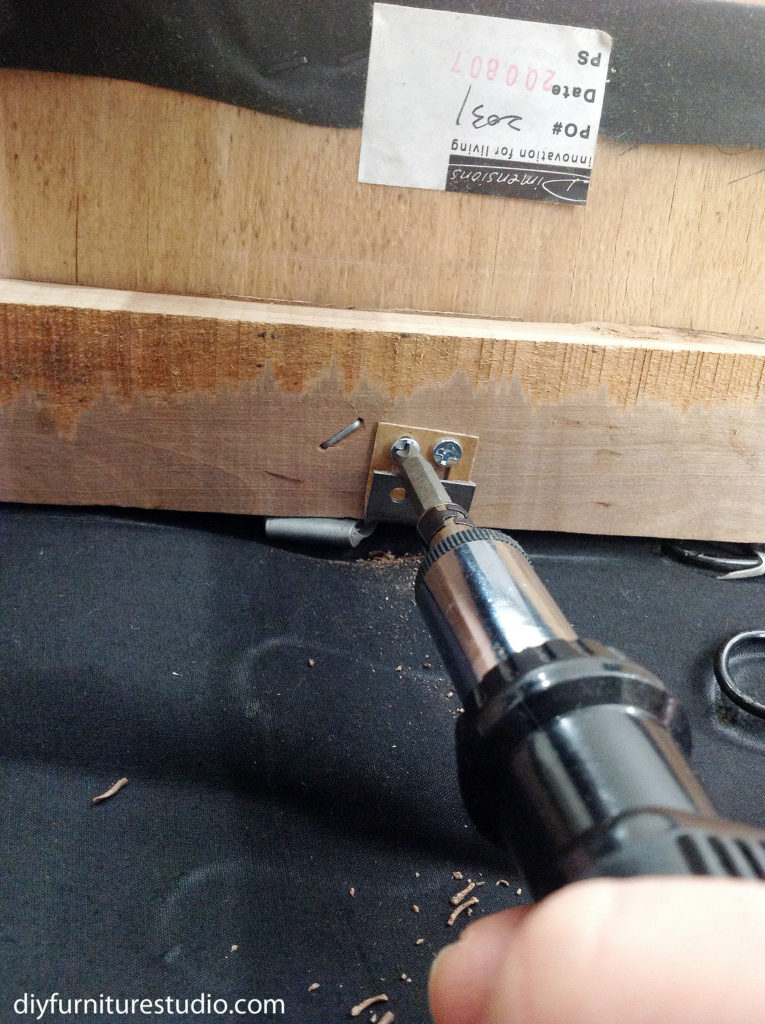 After this, I stretched the spring and hung it on the clip as shown in the photo below.   This wasn’t too hard.  Then I installed the bottom two screws, trapping the spring in place. 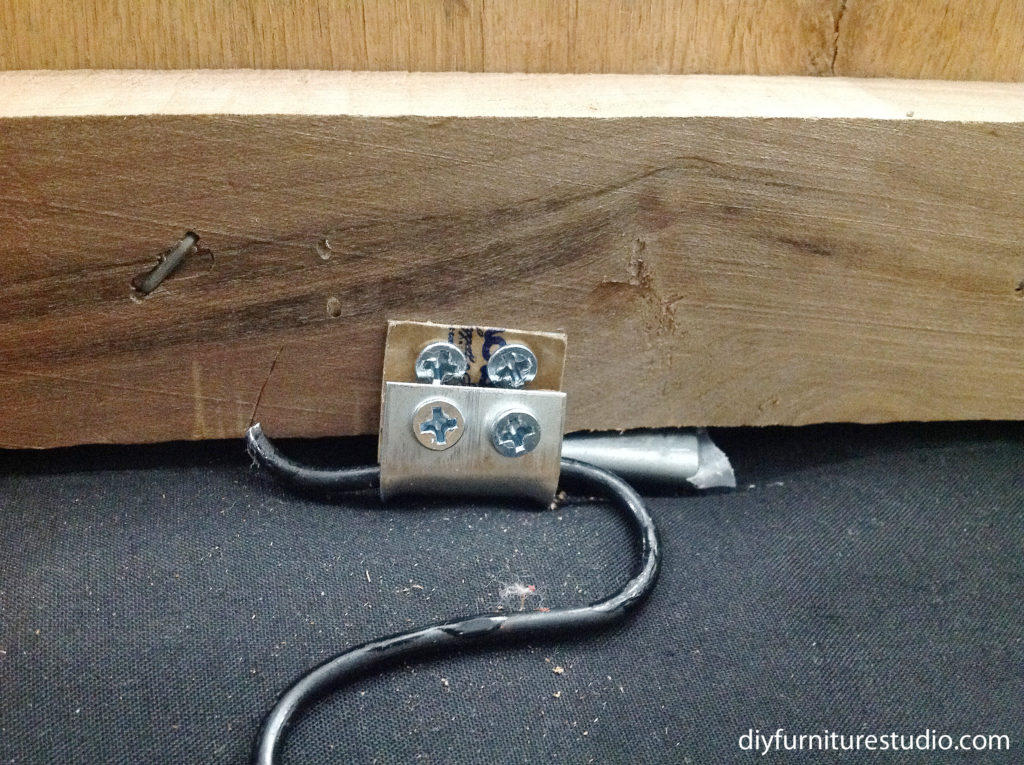 As I mentioned, none of the springs on my sofa were broken. If you happen to have a broken spring, there are several places online you can order a replacement spring (DIY Upholstery Supply, for instance) and you can install it either by putting it into the original clips or putting on two replacement clips using the procedure I described. Depending on where the break is, you also might also be able to use a zip tie (cable tie). As shown in the photo below, I put a zip tie on a spring as if it was broken so that you can get an idea of the placement. I think this would only work for springs that are broken far enough away from where the zip tie is attached. 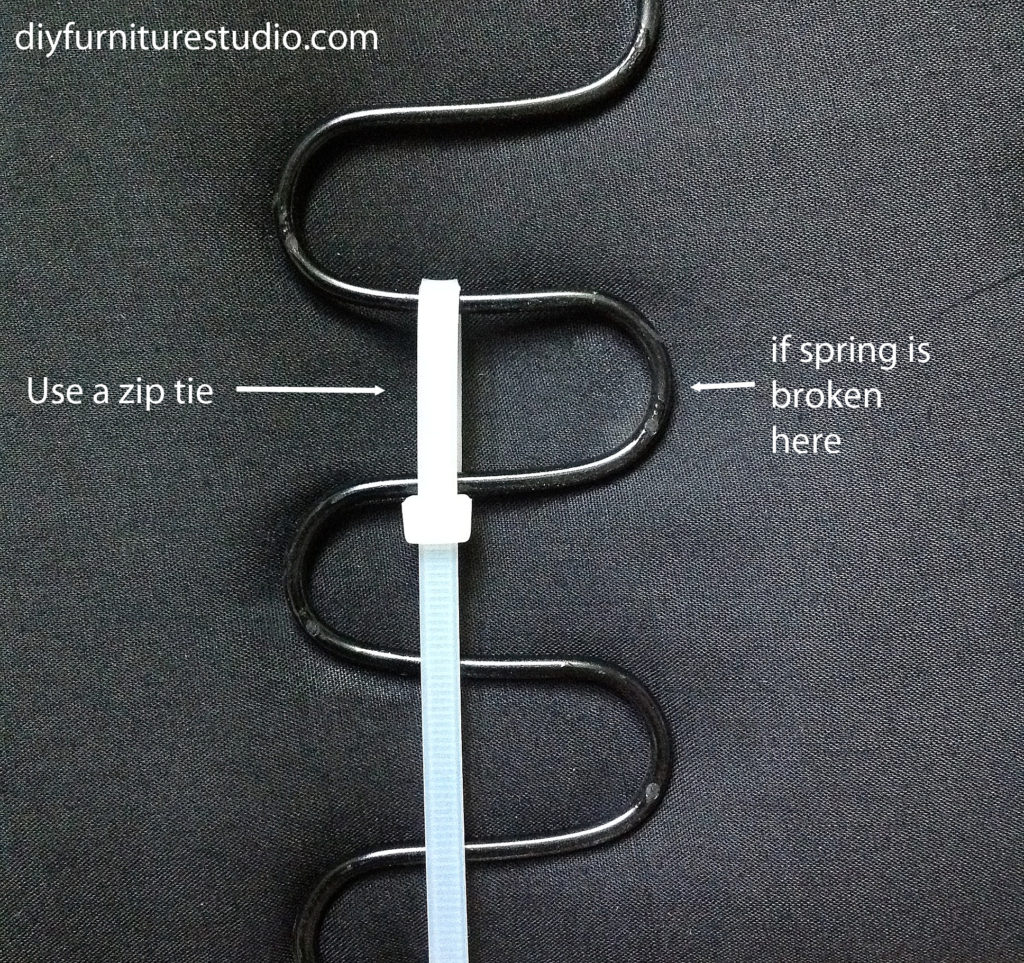 You can also use zip ties to stabilize springs relative to each other, if spring movement is a reason for the sagging. 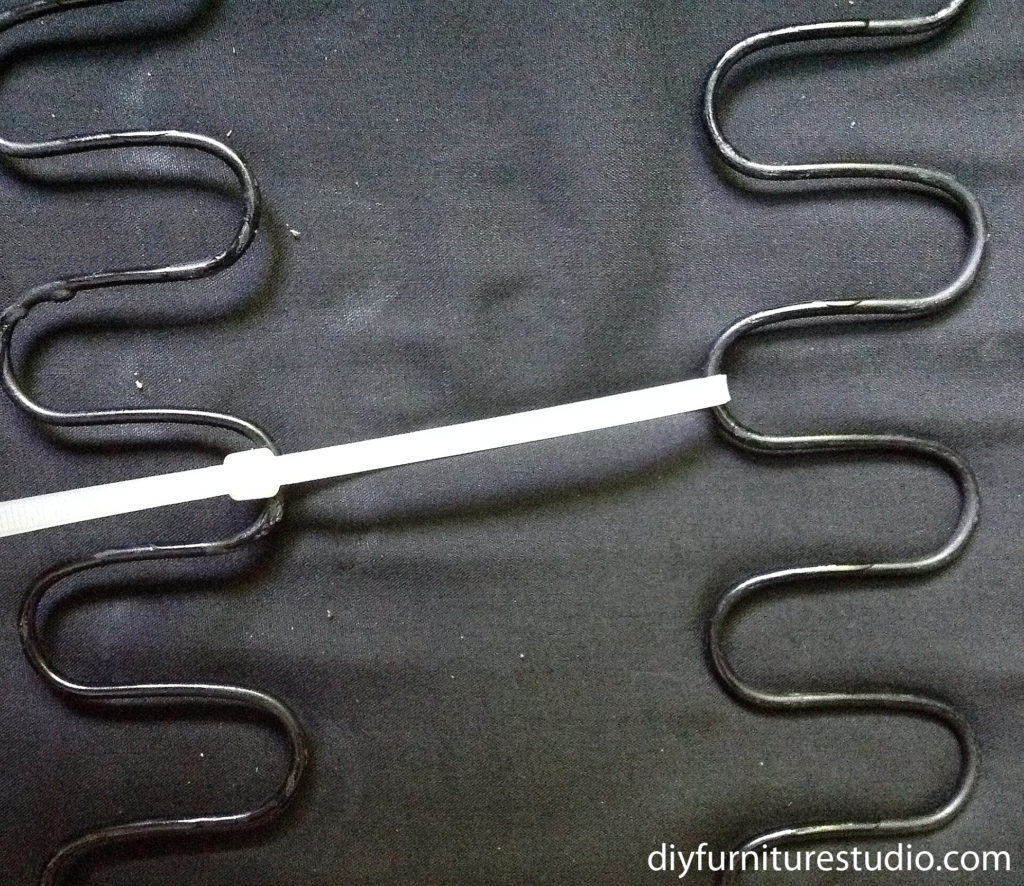 My sofa is now very comfortable to sit on, with no sagging! To be something I really love, I’m going to need to address the sofa upholstery, which has seen a better day. I’ve been doing research on making slipcovers and reupholstering furniture, and will do this project sooner than later.

I hope you found this post useful, and thanks for stopping by!